Mihai turned around a detailed server move in less than 24 hours and not a single thing was wrong with the move. 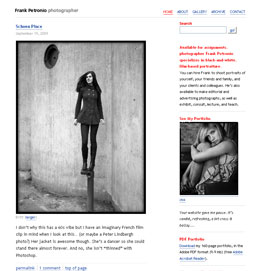 Frank Petronio a very talented photographer from New York contacted me and asked for an important fix on his movable type blog.

On September the 20th, 2009 which is two days ago, in my evening, I've got an email from Frank Petronio describing the problem that he had.

Here is the exact message he sent me:

I am a photographer with the website www.frankpetronio.com. The blog runs on MT v.3, developed in 2005 by Michael, local developer. For 4.5 years it has run flawlessly.

A couple of days ago I started to get locked out and did not understand what is going on. I posted an inquiry on the MT Forum here:

Which led me to think that the problem was with the old Berkeley database. I have ZERO technical background and know nothing of this. But I posted another question after my developer, Michael, attempted to convert the Berkeley DB to MySQL:

Now my developer is over his head and doesn't know what to do. He just sent me this msg:

"I don't mind doing this work, but the problem is simply daunting. The suggestions of Mike T don't actually help any, though I realize he means well.

However, I do like his idea of you contacting Mihai Bocsaru, as he seems to have extensive experience with these kinds of problems (I checked out Mihai's site and was impressed). My suggestion is to talk with him and see what he'd charge to do the MySQL conversion.

If you do hire him, he's going to need the credentials for the MySQL database I created for you. You can tell him that that stuff is commented out in the mt-config.cgi file.

Also, I'm available to answer questions and help in any way he needs.

Can you please help me?

Thanks to Mike T, which referred Frank to me I've been able to fix Frank's problem and to have him be able to operate his movable type blog again.

After some investigation I've found the issue, I've isolated it and then I've recovered the entire Berkeley database. Then I wanted to make sure that the database is indeed fixed and operable.

Moments after, I've started the database migration from Berkeley to mySQL.

I did this for two important purposes:

As a professional I've considered that just converting Frank's database to mySQL, won't be enough.

He was running movable type v3.35 which was released about 3 years ago. Since that version was released, Six Apart din an incredible job with Movable Type 4.

Movable Type v4 appeared in 2007 and since then we've seen huge efforts from Six Apart crew to make the tool better, more stable, faster and to add to it more and more features.

For this consideration I decided to upgrade Frank's movable type installation to the latest version, movable type v4.31 released on the 20th of August, 2009.

After fixing and upgrading his weblog, Frank forwarded to me the following note from his developer which refers to myself:

He turned out to be very nice and helpful.

This is really good for me to know. I'll keep him in mind when I'm up against MT stuff I don't know.

This kind of feedback is what motivates me to do this kind of work, web development!